Thank you to Hasbro Gaming for providing me with a sample. This article may contain affiliate links. All opinions are my own.

I’ve always been a huge board game fan. Ever since I was a kid my family and I would sit around the coffee table in the living room and have a family game night once a week. I have so many fond memories of beating my little brothers at games like Monopoly,Clue, Candy Land or Connect Four. Game night even transferred into one of my favorite date night activities with my future husband and we continue to love to play board games. Now that I’m a mom, I love finding fun games for my kiddos to play and for us to enjoy as a family.

Thankfully Hasbro Gaming has us covered when it comes to finding the classics as well as new games to keep us entertained. One of their new games for Summer 2013 is Monopoly Empire! This new twist on the classic Monopoly game allows you to collect your favorite mega brands, such as Coca-Cola, McDonald’s and XBox to become the ruler of your own Monopoly Empire! 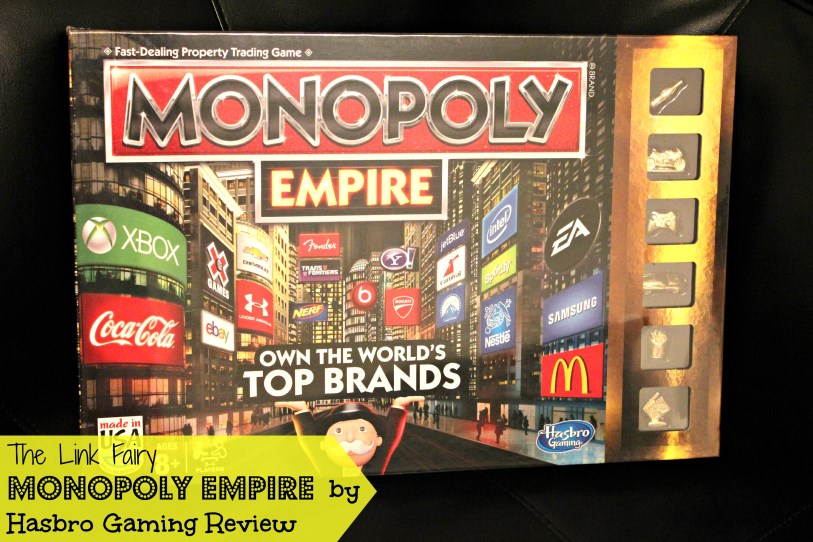 The first thing I noticed about the game were the new game pieces! One of the neat things about Monopoly Empire is that you can play as some of the world’s top brands. The pieces included are Paramount Clapperboard, MacDonald’s Fries, Chevrolet Camero, XBox Controller, Ducati Motorcycle, and a Coca-Cola Bottle. The board is set up a bit differently then classic Monopoly. Instead of places like Boardwalk and Tennessee Ave, each property is a brand such as Hasbro, Ducati and Coca-Cola. Each player is given a billboard that they can fill with the tiles of each brand they purchase. Players collect rent from their opponents based on their billboard and the player to fill their billboard first is the winner!

My kiddos are too small to enjoy a game like Monopoly Empire, but my husband and I have had a blast playing it! It moves much faster than classic Monopoly. It took my husband and I about 30 minutes to finish a game. It takes a little getting used to but after about one round we were able to work our way around the board. This game would be perfect for teenage kids, especially since it features brands they would be familiar with as well as it’s shorter game time.

If you’re looking for a new way to spice up family game night and get your teenagers involved, I highly suggest picking up Monopoly Empire!

You can find Monopoly Empire on Amazon.com

Enter to win your own Monopoly Empire!