I received a free dinner experience at Medieval Times in Orlando, FL thanks to Visit Orlando. All opinions are completely my own. Your experience may vary from mine.

Orlando, Florida is full of amazing places and things to see while on vacation. One of my favorite spots that we visited while we were there this Summer was  Medieval Times Dinner & Tournament!  Medieval Times Dinner & Tournament is a live action dinner show that thrusts you back in time to when Kings ruled the land and being a Knight was the highest of honors. You’ll get to feast on royal fair and watch as the Knights compete in a tournament fit for the King! Cheer on your designated Knight and see who fights to the finish to be named the winner of the tournament and defender of the King. 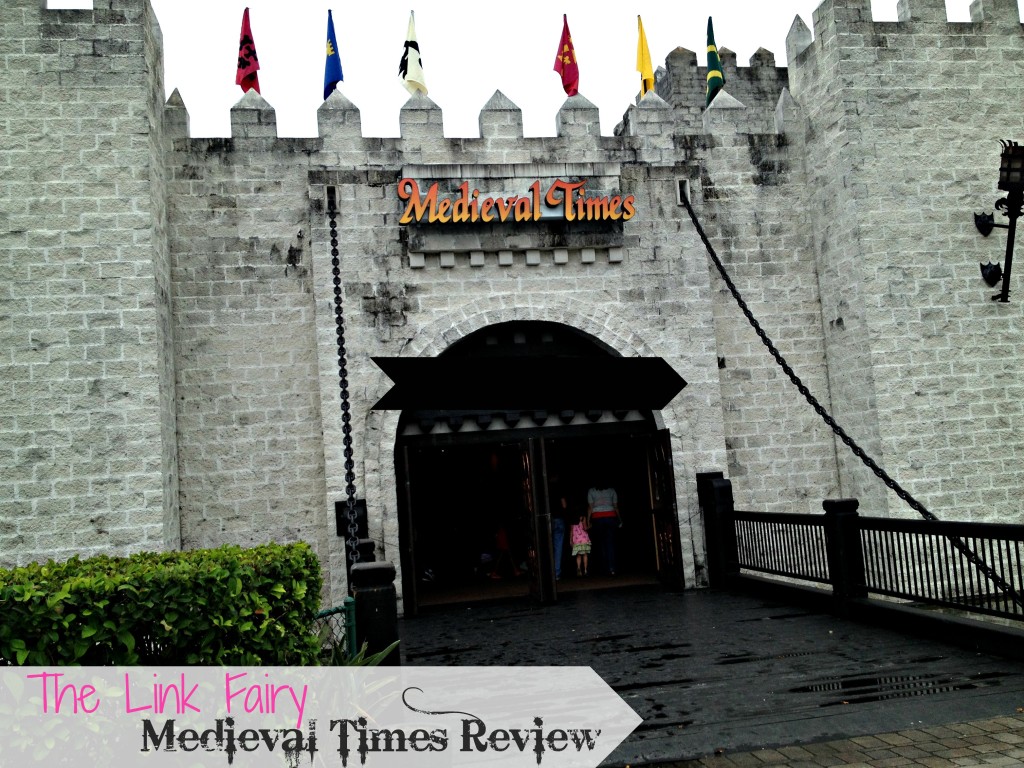 Becoming part of the King’s court

When it comes to looks, you certainly can’t beat a giant medieval castle constructed off of one of a Orlando’s bustling main streets.  From the moment we pulled into the parking lot we felt like we’d already become part of the King’s court. We shared our visit with Ashley from Spit up is the new black and her lovely family, which made the experience even more fun! Upon entering the castle, we were assigned to our knight’s section ( we got the black knight ), given some awesome paper crowns and were then shown into the court room. On our way we were able to pose for a photo that we later were able to purchase to commemorate our visit. 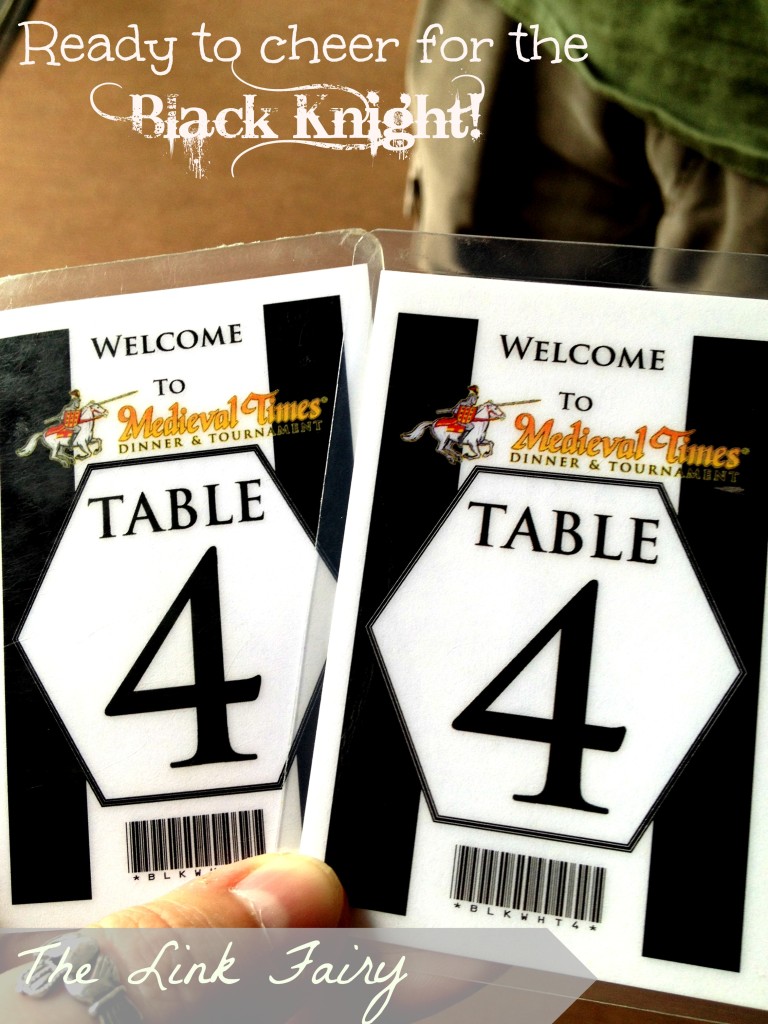 Once inside the court room, my husband and I decided to indulge in some of the royal fair available at the bar. We both somehow ended up paying a handsome sum for our drinks and the collectors glasses they came in, but I’m glad we did as they made for neat souvenirs.  After a few minutes of waiting, we were shown into the tournament hall where we sat down for dinner and take in the games. Seating is done by rows and one row has it’s own server.  Each person receives a pennant  to wave while cheering for your Knight as well as a napkin that states what the bill of fair will be. 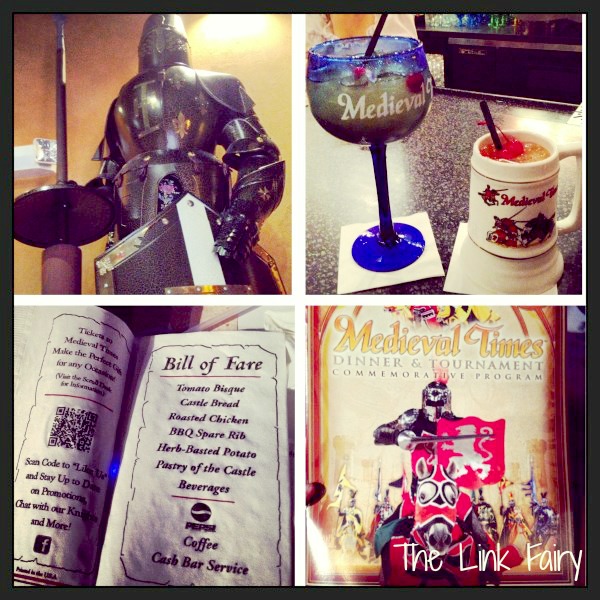 Soon after entering the tournament hall the lights dimmed and we were greeted by the master of ceremonies! Dinner was served as we watched the tournament unfold and I was surprised at how large the portions of food were. I certainly wasn’t left hungry! The games that were being played out in front of us by the Knights were truly fun to watch and it was neat to see how talented each one was. It was amazing to see what they were able to do on horseback and the horses themselves were even giving us a show. 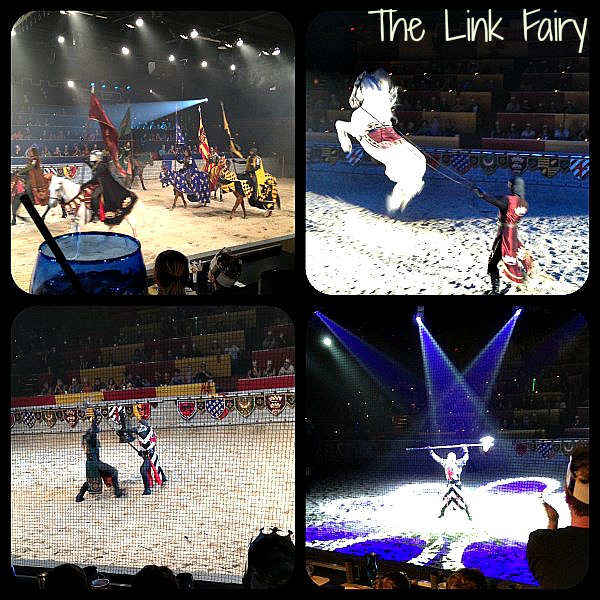 The entire experience lasted about an hour and a half. We had loads of fun watching the show and also felt that the food was pretty good. The actors do a great job of mixing fantasy with real historical tournament games that those of noble blood used to participate in back in medieval times. It was fascinating to watch how skilled they needed to be in everything from sword fighting to horseback riding. Once the show was over we were all escorted back to the thrown room where you could purchase fun souvenirs, meet the actors from the show or simply go on your merry way.

Once in the throne room, Ashley and I needed to hit up the ladies room before we left.  When we came out we saw this sight! I have to admit, it was pretty much the highlight of my night. 🙂

When my husband and I attended we did not bring our two young kiddos, and personally, I don’t think the show would be best for children under the age of 7. There are lots of flashing lights, it’s loud and there isn’t much space for kids to move around while your sitting. If you have younger ones like we do, you may have a better experience if you have a sitter. With tickets priced at $59.95 per adult and $35.95 per child, you’ll want to make sure to get the most out of your dinner experience.

Have a knightly adventure

To find a Medieval Times Dinner & Tournament near you, click HERE!

Stop by Ashley’s site, Spit up is the new black and see the other Orlando adventures she went on!

I received a free dinner experience at Medieval Times in Orlando, FL thanks to Visit Orlando. All opinions are completely my own. Your experience may vary from mine.