I received an all expenses paid trip to from Disney to Los Angeles, CA to attend the Planes Red Carpet Premiere, an event for The Little Mermaid diamond edition DVD release and to meet Disney’s Super Buddies.  I was also provided a sample of the film to review. All opinions expressed are my own.

Growing up, my favorite movie was Disney’s The Little Mermaid. I can’t tell you how many times I’m sure my mom heard me serenading my stuffed animals with my 5 year old rendition of “Part Of Your World”. So when I found out I’d been invited to attend an event for the release of the Diamond Edition of The Little Mermaid, I thought I’d passed out and floated away to Disney heaven! While on my trip, I had the chance to attend a group interview with John Musker and Ron Clements, the writer and director of The Little Mermaid!  Take a look at what it took to create one of the most endearing Disney films to date from the men behind the scenes! 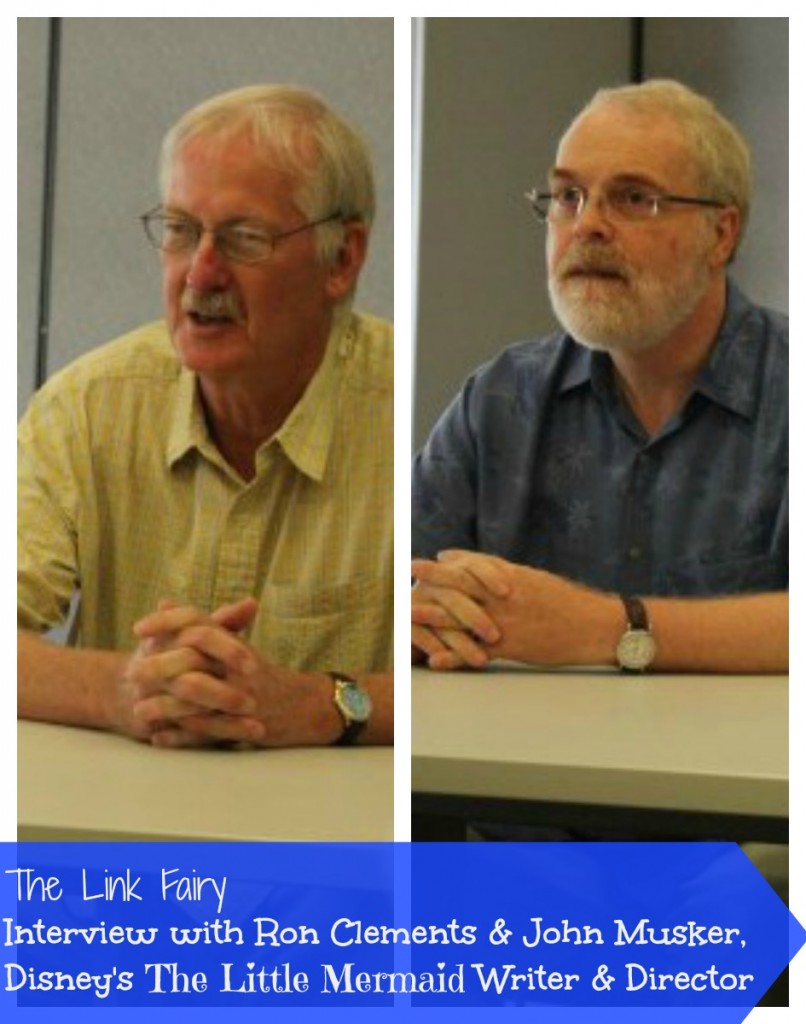 When you started the movie, did you really think it was going be as big of a hit as it is now?

RON : No, we, we didn’t.  I mean we, we felt it had potential to be a really good film, I think, from, from fairly early on and we were intimidated because it was the first fairy tale.  I– I mean, we were of a generation that kind of, I guess, I mean we’re both about the same age, we’re the baby boomer generation.

RON : [OVERLAPPING] We both aspired to work at Disney and, and, um, and had been there for quite awhile, but MERMAID felt like it was kind of special ’cause it was the first film that was a fairy tale and it, and so it harkened back to the, like, SNOW WHITE and CINDERELLA.  So we felt a certain amount of pressure with that.  But, um, but no.  We didn’t…

JOHN : [OVERLAPPING] When we’re working on it, the public doesn’t see it very much.  Not even our own families for the most part.  So it wasn’t until we started to have public previews and we saw the reaction we got some sense of that, in fact.  And just as this movie was about to be released I think somehow Spielberg, I don’t know if he had even seen it, but Peter Schneider, who was an executive at the time, we were in this room for something else, he said, “Steven Spielberg says it’s gonna make a hundred million dollars.”  And so we were like, “Really?  Spielberg thinks it’s gonna make a hundred million dollars?”  And so we were getting, there was excitement building.  But as you’re doing it, you’re, we were the audience for the movie, really.  You’re just trying to make a movie that you think — that we would like to see and, uh, and you hope somebody else will like to see it to.

I think Disney was generally really happy with the movie but about six months before it came out their sense was they thought it would do okay, but it would be limited because it would be kind of perceived more as a girls’ movie and that would sort of limit it in its box office. What did you think of that?

JOHN : Yeah, I was in a meeting with Jeffrey Katzenberg where he was talking to Mike Meyers about the movie and then we talked to him about it and he said, you know, “We don’t expect it to do as well as OLIVER & COMPANY because, you know, it’s, it’s a girls’ movie and girls’ movies don’t do well.”  We’re like, “It’s a girls’ movie?”  We didn’t even realize while we were working on it.  I’m a guy.  I like this movie, you know.  Uh, so we were glad that he was wrong.

RON : What they didn’t foresee though, was that, um, it would have a fair amount of adult appeal along with kids appeal and even be a date movie.  Um, that, um, I think that took everybody by surprise, that, that, um, it, it sort of broke through — and which is always, for us we never, um, I mean, of course we’re Disney fans and, and if you know the history of Disney, even Walt Disney, um, when we were making films like SNOW WHITE and PINOCCHIO and FANTASIA and BAMBI, um, they weren’t really regarded as kids’ films.

JOHN : I, I had read some story notes from Walt Disney, uh, on BAMBI.  BAMBI was released in 1942 and, uh, they had an in-house screening of BAMBI before it was done.  And some of the note cards Walt got back, one of them said, “Well, I think that the kids will like it.”  And he was like, “What are they talking about?  Is that some kind of crack?  What is that?  The kid’s will like it?”  Because he really didn’t think he was making films that were just for kids and that was the approach when you make this film, we didn’t think, “Oh, this is a kids’ movie, adults and all ages movie.”  That’s the approach we took to making it. 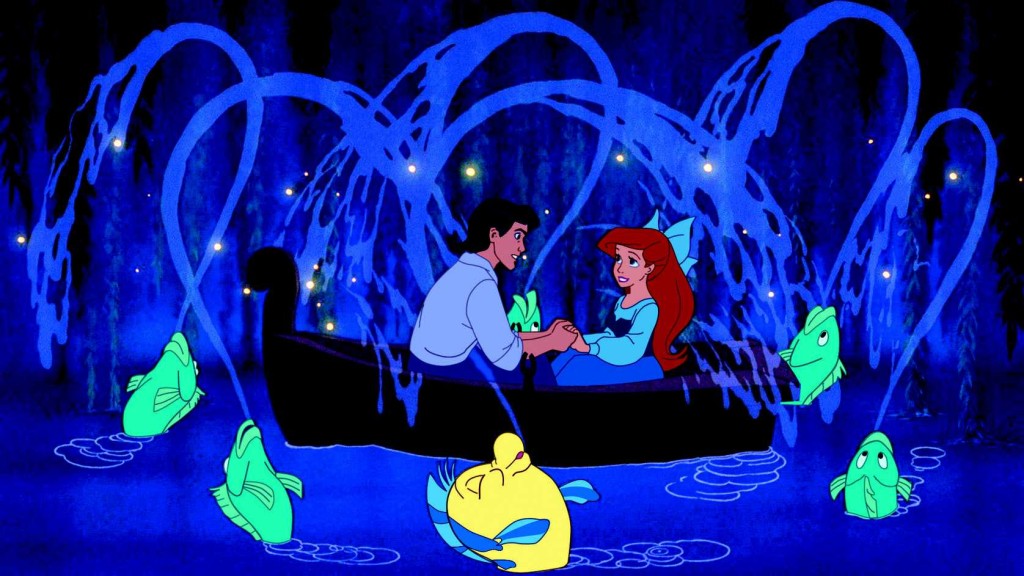 Was there a scene or a character that was really tough to animate, that sticks out in your mind?  That just wouldn’t work the way you wanted it to?

RON : Yeah, I would say Ursula was a challenge, uh, with all the tentacles and the, the, the stuff —

JOHN : [OVERLAPPING] The complexity of that.  Yeah.  And I think realistic characters are always hard, so the Prince and Ariel were, were tricky.  In some ways Ariel was trickier when she was on land than she was underwater because we know how people move almost, you know, in that kind of normal world.  Um, but, uh, Glen Keane and Mark Henn were in charge of animating, uh, Ariel and they did a fabulous job.  Ruben Aquino was in charge of, uh, Ursula and I would say that was the challenge.  I don’t remember too many scenes that were kind of stumbling blocks.

RON : No, Ursula he did a beau– I mean, I would say just generally, uh, princes are.  Although it’s gotta be easier with more techniques but, but the sort of realistic male character is, is, is probably the hardest character to pull off.  That’s why the princes tend to have smaller roles, um, in a lot of the films, um, because it’s just, um —

JOHN : When I, when I stared at the studio Eric Larson was  the veteran animator that I worked with and he had worked on PINOCCHIO, doing Figaro the cat and things like that.  He’d also worked on Cinderella and I was complimenting him on his animation on Cinderella.  He did a bunch of scenes of Cinderella.  He was the actor that was, in fact, bringing her to life in those scenes.  And he also did the Prince in Cinderella and he said, “You all, thanks for the stuff on Cinderella.  You’re so happy with that.”  But he, this is literally 27 years after the movie came out.  He said, “But yeah, my Prince, it was stiff.”

I never would have thought in a MILLION years that I would ever get this close to the creators of my all time favorite Disney movie! I had imagined it wasn’t easy putting together a full length animated film, but I have a whole new take on it after speaking to Ron and John. It was an absolutely amazing experience and one I’ll never forget. Just wait till you read my interview with Ariel herself,  Jodi Benson! 🙂

Be sure to pre-order your copy of The Little Mermaid- Diamond Edition on Amazon.com

! The Blu-Ray releases on October 1st!

I received an all expenses paid trip to from Disney to Los Angeles, CA to attend the Planes Red Carpet Premiere, an event for The Little Mermaid diamond edition DVD release and to meet Disney’s Super Buddies.  I was also provided a sample of the film to review. All opinions expressed are my own.