We were provided accommodations and park tickets to Schlitterbahn for review. All opinions are my own.

When it comes to finding great getaway destinations that cater to families with little kids, it can sometimes be a challenge. We recently experienced a stay at the Schlitterbahn Waterpark and Resort in South Padre Island, Texas and I have to say it was one of the best vacations we’ve been on with the kids! The resort offers 221 upscale rooms, five on-site restaurants, and sits on the gorgeous beaches of South Padre Island, Texas right on the gulf coast. The resort was even able to use beautiful Loblolly Pines, reclaimed from the 2011 Texas wildfires throughout the property as well as nearly three miles of reclaimed mooring ropes from ships that you’ll notice throughout the resort as well. 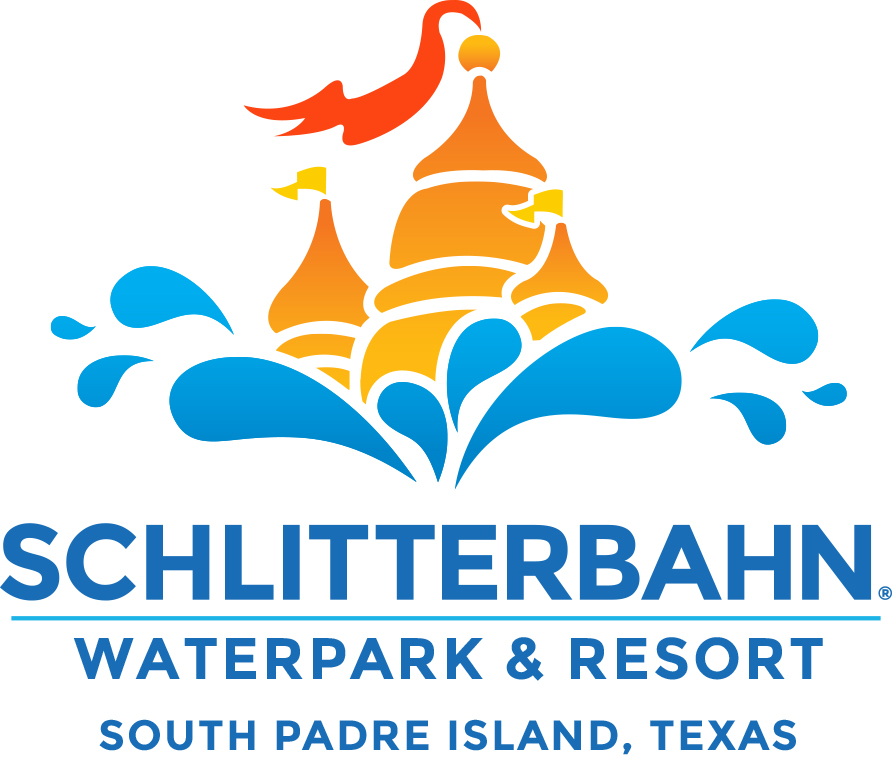 We checked in with no issues and stayed in two adjoining rooms, one double and one king that were in the B tower of the resort which faces the pool and is connected to the indoor waterpark. Tower A is located across from Tower B and faces the beach. The main pool areas are located in-between the two resort towers and include a children’s area with soft play slides, a zero-entry section to the lazy river that runs throughout the indoor waterpark (this part wasn’t open till April though), as well as the main pool where the pool bar was located. 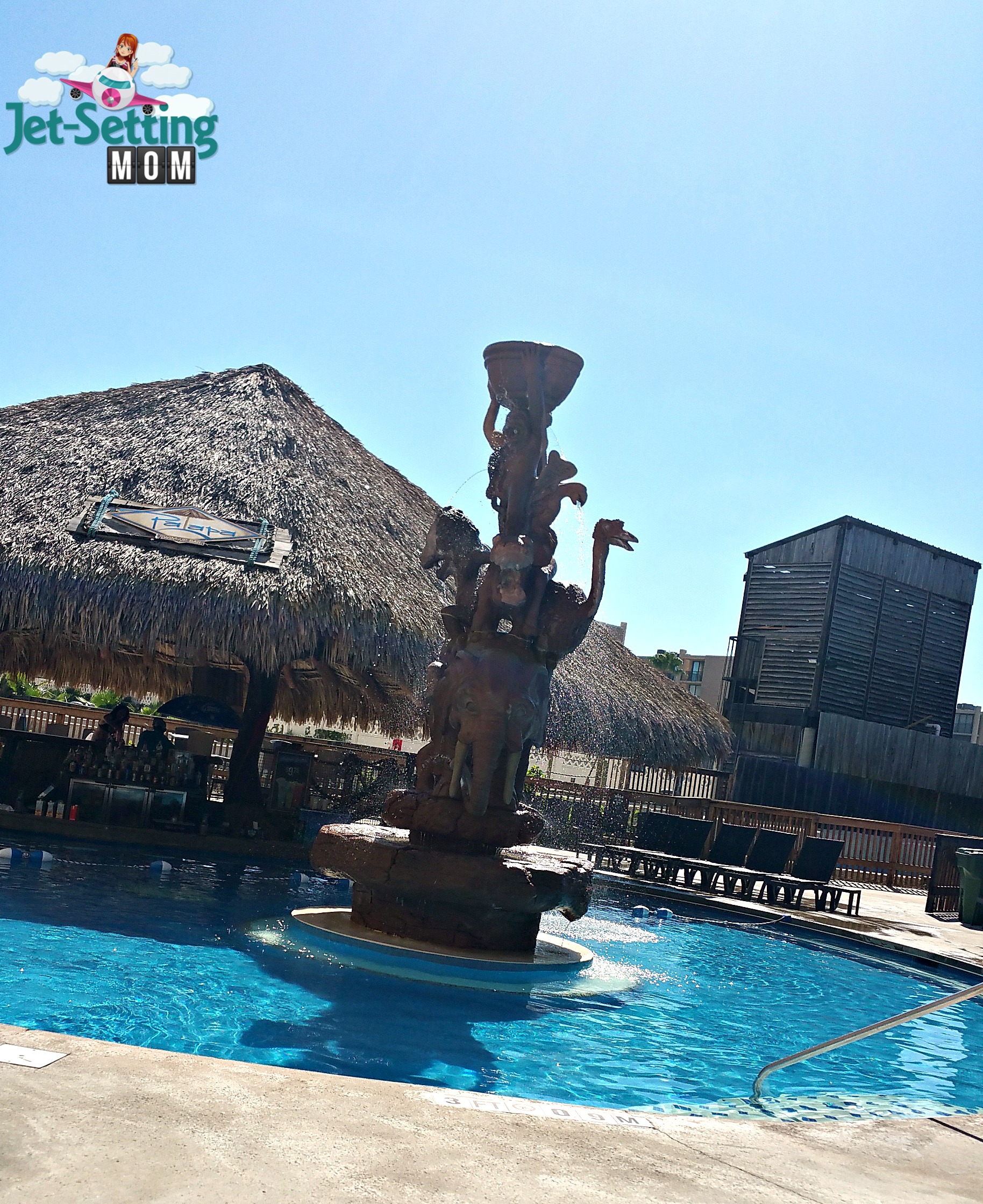 The rooms were very spacious which was great since we had a pack and play to put up for our infant and the double room gave us plenty of space for the other kiddos. Each room offered a sitting area, mini fridge, TV, and safe. The king room also offered a pull out couch which was nice. 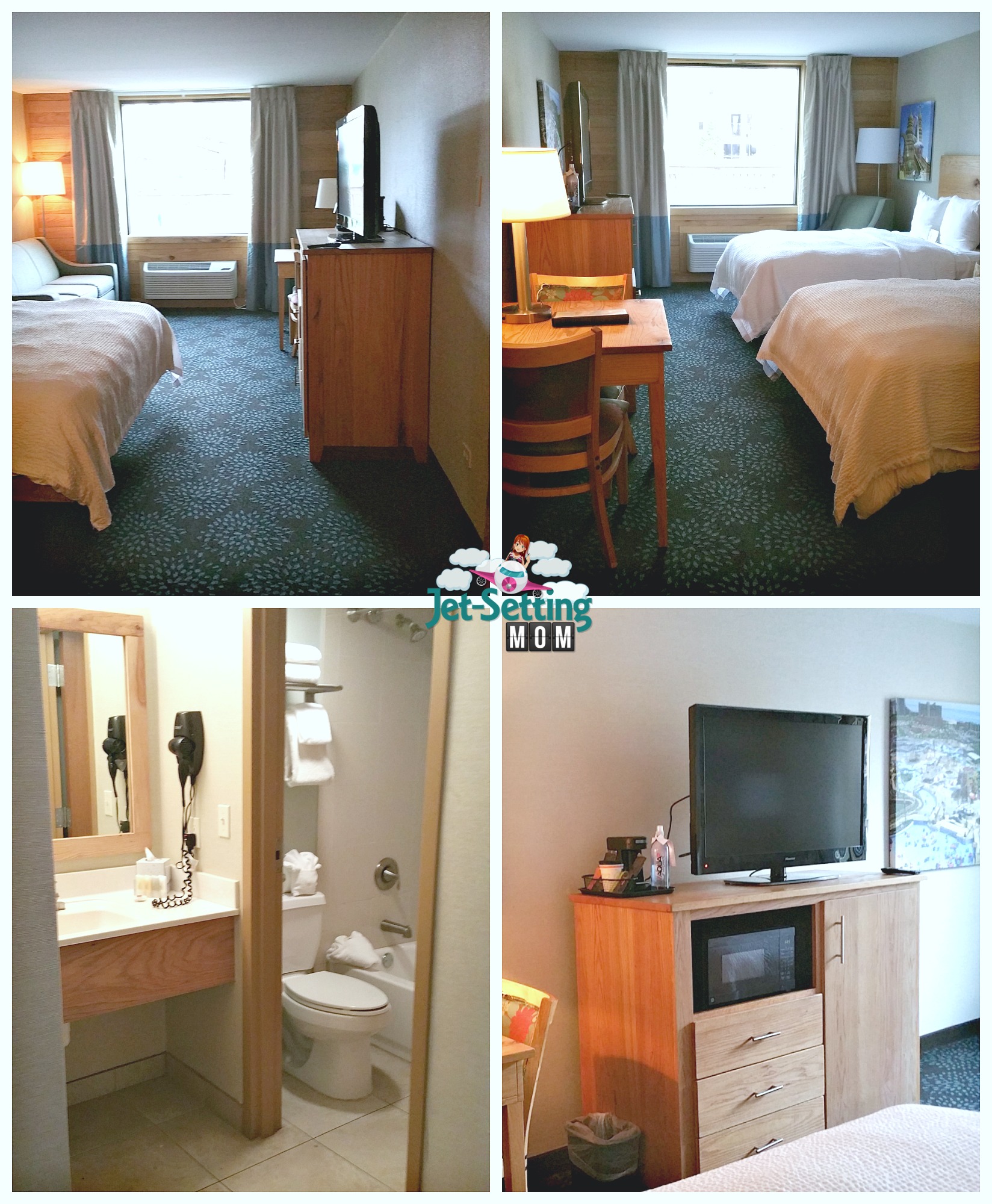 Our rooms were booked under Schlitterbahn’s Stay and Play package which gave us unlimited use of the indoor waterpark during our stay. Since the outdoor park was closed till April, we weren’t able to experience that section of the resort, however the indoor waterpark was a total blast! The indoor waterpark area is connected to Tower A and features the Loblolly Grill, a bar, a Grand Carousel, inflatable jumping area and a Mega Blast ball blasting arena where kids can climb a three story structure and use air cannons to blast foam balls down on each other! Our whole family had a great time taking in the non-water activities available before heading to the waterpark portion.

Across from the dry activities there are tons of tables and areas to sit. I love that Schlitterbahn encourages picnicking throughout their parks, allowing you to bring in as much food and drinks as you like! ( they do ask that no glass containers or alcohol be brought in) They do have a towel station, however they frequently ran out of towels so I would suggest bringing your own with you.

The waterpark area features a circular Torrent River and in the middle, a children’s play area called Pirate’s Cove and two large water slides, BlackBeard’s Twister and Lafitte’s Cyclone. The Torrent River was loads of fun, giving us the chance to inner-tube around the river on ocean sized waves! They even have two person floats that had one side of the float closed off as a seat so that little ones could ride and not feel like they would fall through the tube. Pirate’s Cove however, is where we spent most of our time. 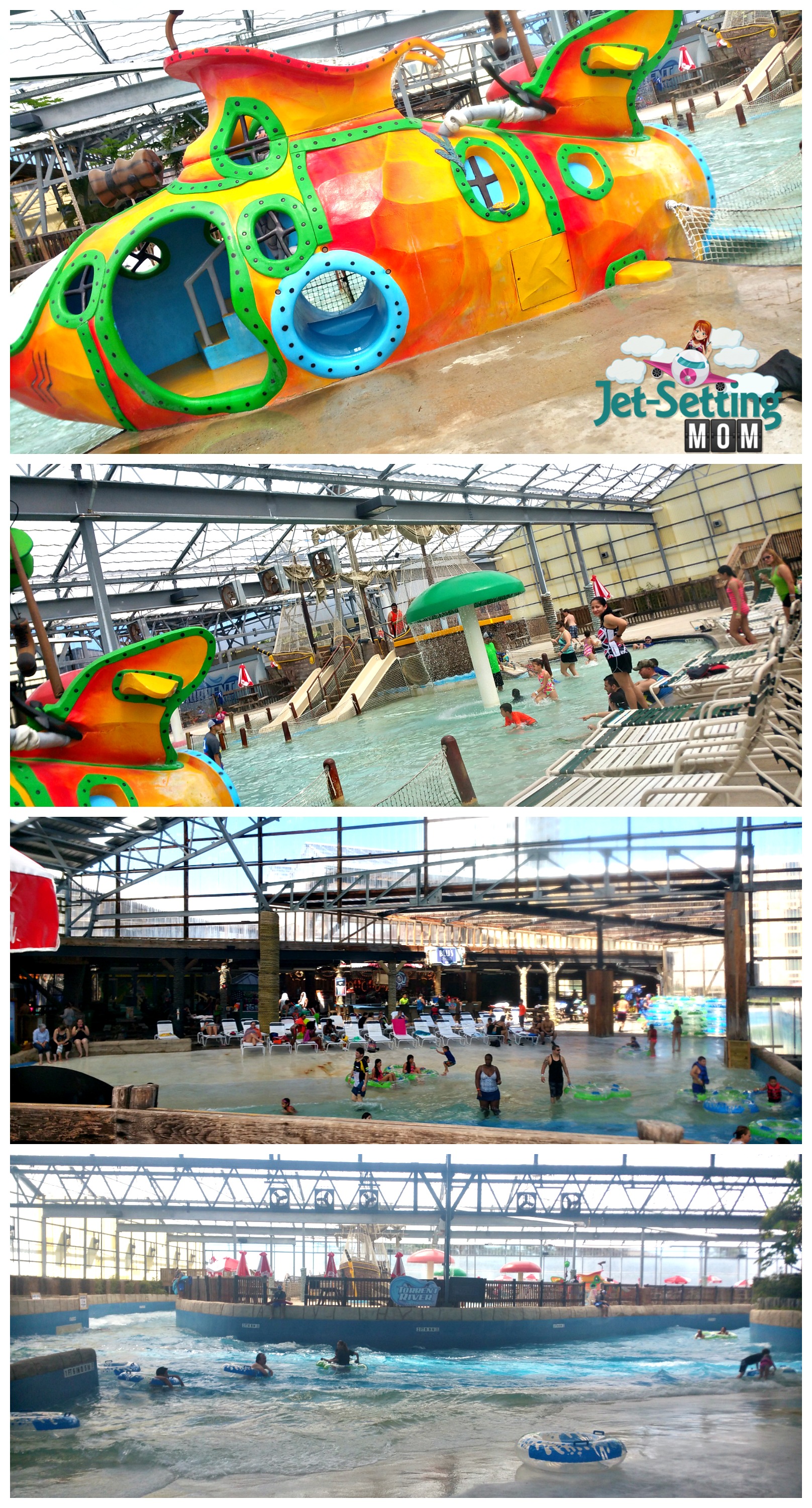 With it’s large area, soft slides, water-spouting mushrooms and giant pirate ship, my kiddos were able to run around and have water fun while I sat with my littlest bean and let her splash around. 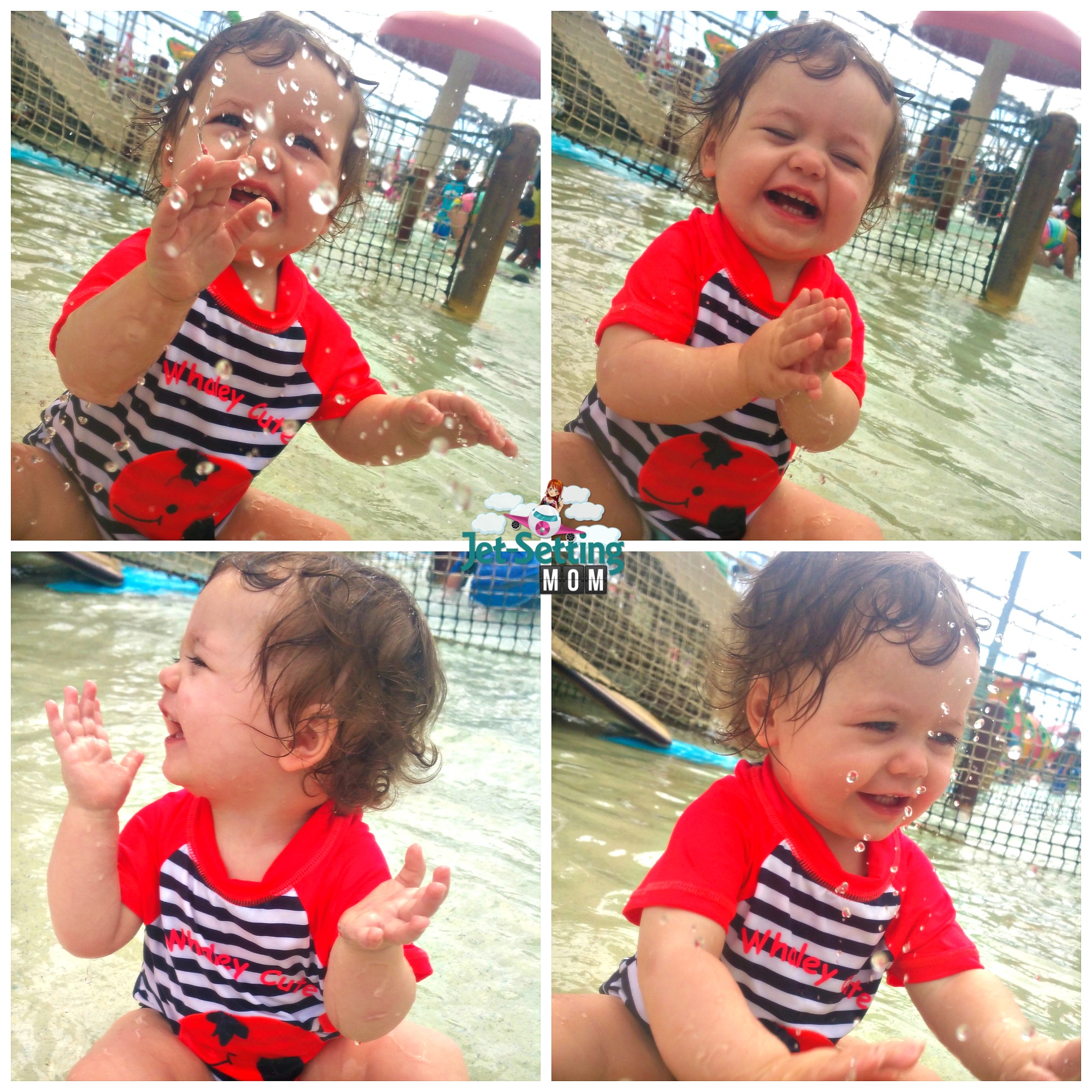 My bigger littles really loved the pirate ship and being able to go down slides their own size. As a mom with multiple kids, it can be hard to keep total track of them as they run around while I have to sit with the baby, so it was nice knowing that there were two lifeguards walking around inside the pool area at all times watching as well! 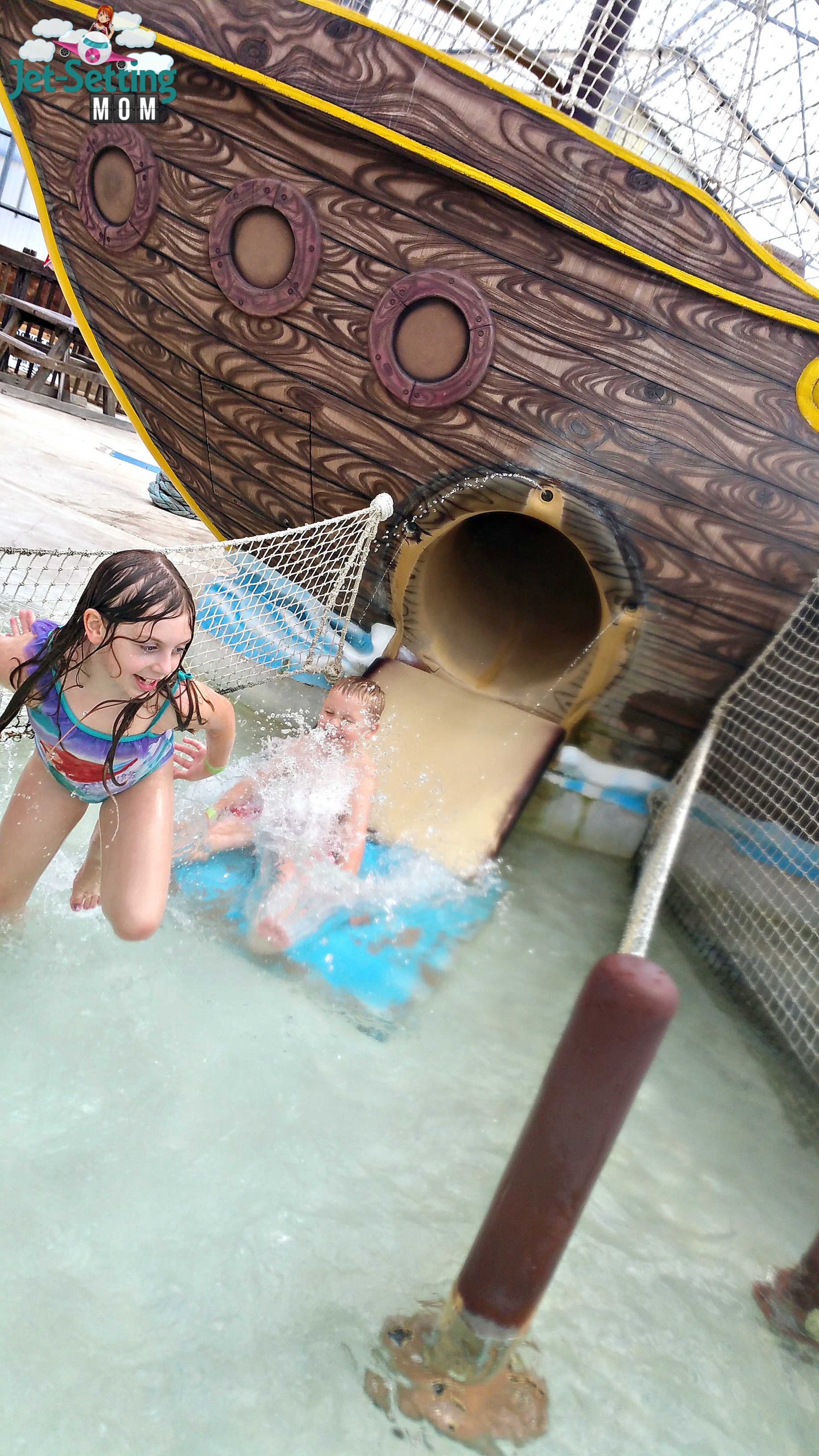 Spending our days at the waterpark gave us quite an appetite! We had the chance to experience 3 of the 5 on-premises restaurants, The Seaside Grill, Loblolly Grill and Shrimp Haus. Our first morning we grabbed breakfast at the Seaside Grill which is on the opposite site of Tower B and offers a beautiful view of the beach. They offer bar-style food and sandwiches as well as breakfast fare. I ordered the Eggs Benedict and loved how it came out!

At night, we took in the excellent seafood offered at Shirmp Haus, a restaurant located on the other side of the outdoor waterpark. During peak season you can float right up to the restaurant and enjoy live music, food, drinks and more. We enjoyed some of THE best seafood I’ve ever had at Shrimp Haus and the kid’s food was just as great. This restaurant is a definite must for your stay, I promise you won’t be disappointed! Not only was the food good but it was affordable as well which was an added bonus.

While at Shrimp Haus we even caught a glimpse of the iconic Schlitterbahn 5-story sand castle which is the main attraction in the outdoor park. Obviously it’s getting ready for all the visitors it’s going to have this April!

We finished our vacation off with a day at the beach and had a great time, although the water was still pretty chilly! The kids loved playing in the sand and running up and down the beach looking for seashells. It was really nice being able to be so close to our rooms in case we needed to go back for anything. The resort also offers rentals such as boogey boards, chairs and more for extra beach fun. 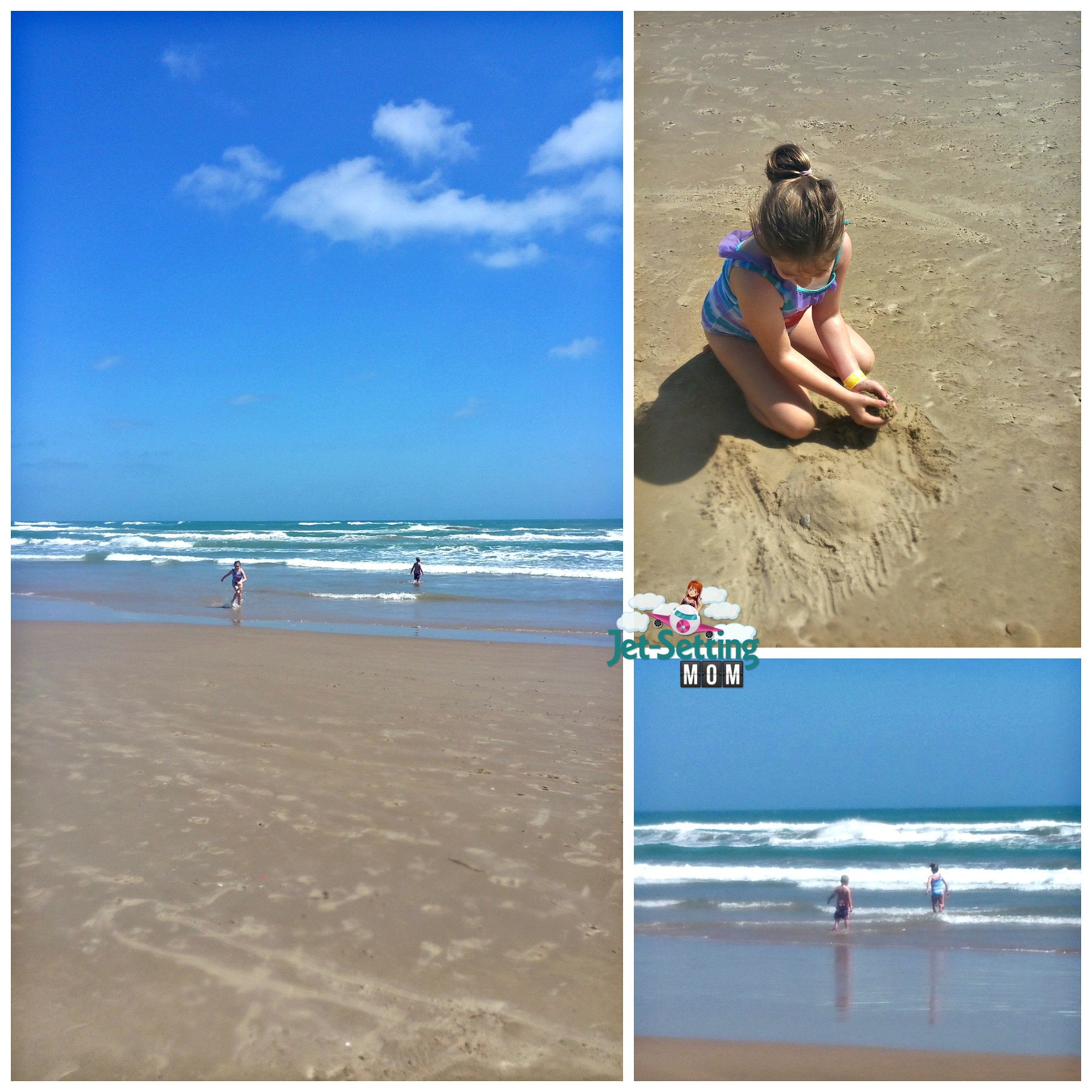 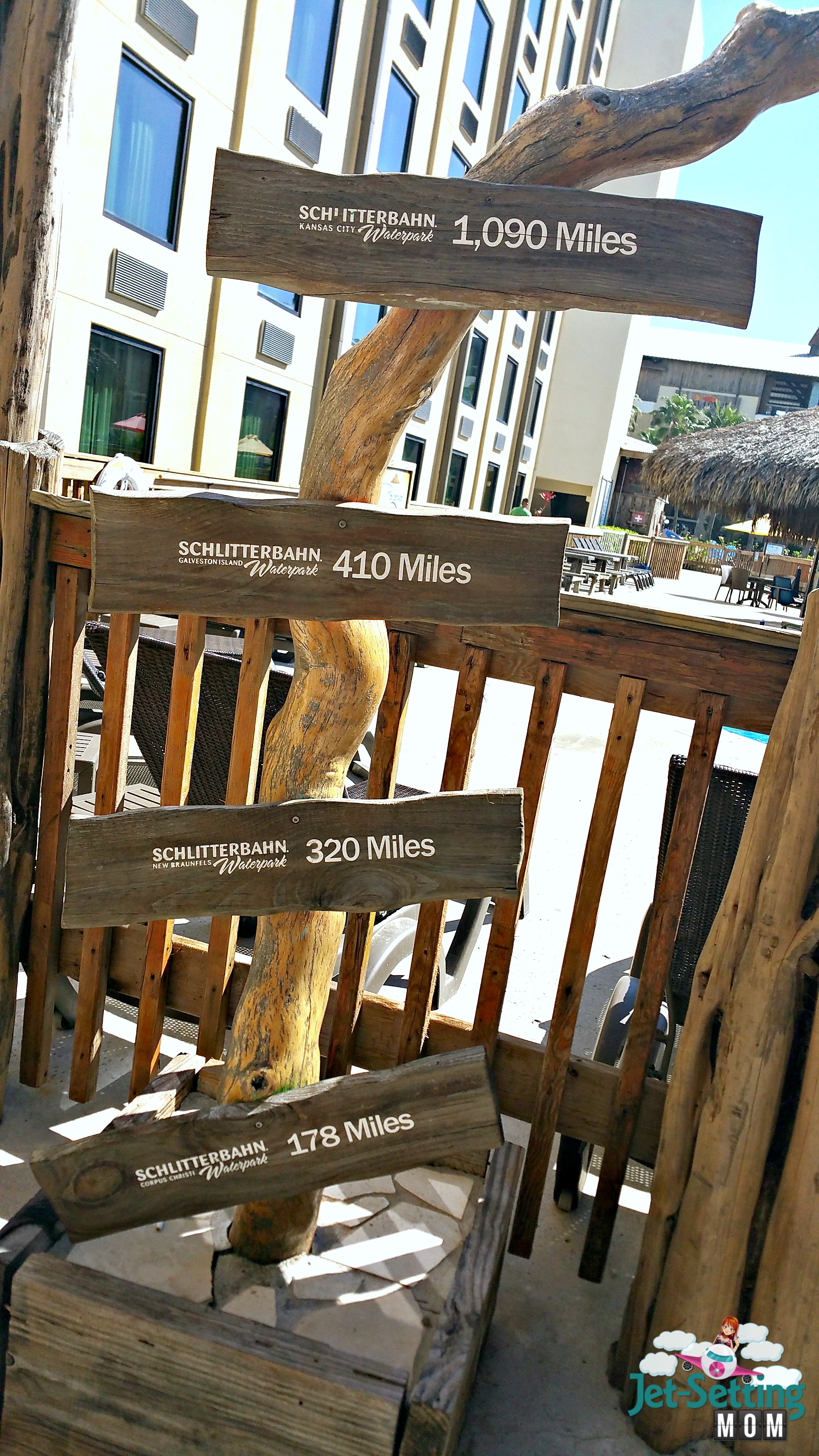 Find the perfect package for your family at Schlitterbahn Waterpark and Resort in South Padre Island, TX HERE!